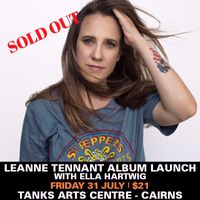 Tennant’s tasty tracks ‘Cherry Cola’, ‘Till The Sun Dies’, ‘Everspin’, ‘Bring It All Back’ and newest single ‘Record Stores’ have already received outstanding support both at home and abroad, from the likes of Double J, RAGE, Spotify and UK radio stations, BBC and Amazing Radio – what a wild ride and all before the album is officially released!

‘Happiness is…..’ follows on from record ‘Red Wine, Late Nights’ (2016) and debut album ‘Pull Up Your Britches’ (2015). A lot has happened since. On top of her three Qld Music Awards, Tennant took home the prestigious Carol Lloyd Award (2018), the Grant McLennan Scholarship (2019) and has played a bunch of live shows and Festivals all over, including BIGSOUND, Woodford Folk Festival and the Commonwealth Games.

With a few song writing competition wins up her sleeve, singer songwriter Ella Hartwig’s music crosses indie with folk, as her new EP attests to. Ella, who hails from Cooktown, continues to develop her exposure to the music industry through participation in the iHeart Song-writing Club and the Big Sky Girls mentorship program.